Emma Cline’s debut novel got a seven figure book deal. Seven figures, you guys! But after reading The Girls, I have to say, she earned it. Based on the Charles Manson murders, The Girls is the story of a young girl named Evie who falls into a cult. But she’s not drawn in by the charismatic leader (who is, of course, a man). Instead, Evie is seduced by a bad, beautiful, dirty, black-haired vixen named Suzanne.

Unlike most Manson-based fiction, the novel really isn’t about Russel, the angry hippy with poor guitar-playing skills whose grudges incite murders. Cline’s book is less about the sensationalist violence and more about girlhood and all its complications, pains, and joys. It’s a compelling story (an all-nighter page-turner) but the best part of The Girls is how Cline captures the obsessive insecurity of teenage femininity. Like take this passage:

Every day after school, we’d click seamlessly into the familiar track of the afternoons. Waste the hours at some industrious task: following Vidal Sassoon’s suggestions for raw egg smoothies to strengthen hair or picking at blackheads with the tip of a sterilized sewing needle. The constant project of our girl selves seeming to require odd and precise attentions… Back then, I was so attuned to attention. I dressed to provoke love, tugging my neckline lower, settling a wistful stare on my face whenever I went out in public that implied many deep and promising thoughts, should anyone happen to glance over… I waited to be told what was good about me. I wondered later if this was why there were so many men at the ranch. All that time I had spent readying myself, the articles that taught me life was really just a waiting room until someone noticed you—the boys had spent that time becoming themselves.

Daaaaaamn. I wish I had read that at age 15. I wish I had known how little difference those ritualistic pluckings and preenings would make, how much energy I was wasting on thankless tasks that always made me feel worse, never better.

I wish I could say I’m beyond vanity now, but that would be a hilariously transparent lie. I’m so vain! I probably think this song is about me! But I’m also less inclined to spend time or money on my vanity. Because at the end of the day, I’d rather spend those hours becoming more and more myself.

Image by Hope Gangloff, whose work I’ve written about before and admire so goshdarn much. 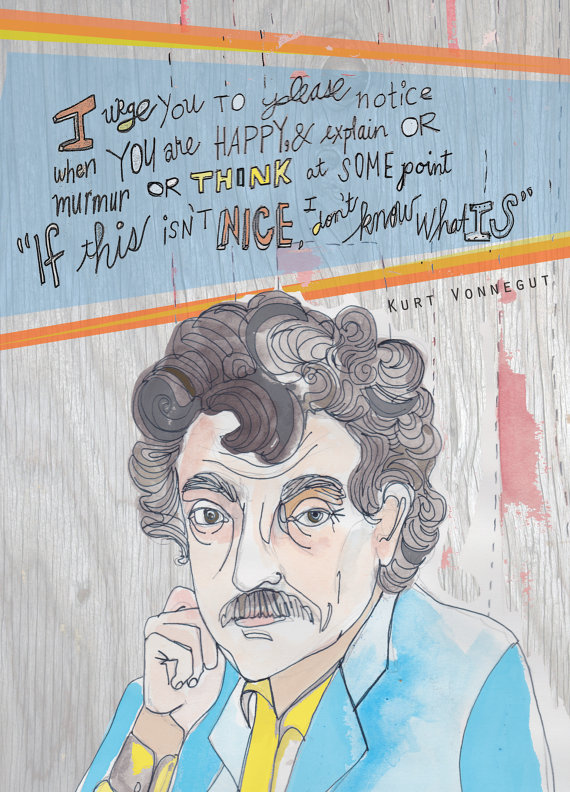 1. Isn’t this portrait of Kurt Vonnegut great? He wrote such dark books, but had such a lovely, optimistic mind. The Chicago-based artist does other funny “pep-talk” prints, including a great one of Dolly Parton.

2. I just learned a new “untranslatable” word, and it perfectly describes my apartment: Tsundoku. It’s a Japanese word that describes the act of buying books and leaving them unread in piles around your home. Right now, I’m staring at a pile of books that includes novels by Sarah Waters (who wrote Fingersmith, which was just fantastic) and The Snow Child, which I’m actually quite close to finishing, so technically it’s not “unread.” But I wish it were! It’s so, so good that I wish I hadn’t read it so I could go back to the beginning and start over. It’s about an old homesteader couple in Alaska that wish a child into being. The magic snow-child’s name is Faina. How beautiful is that?