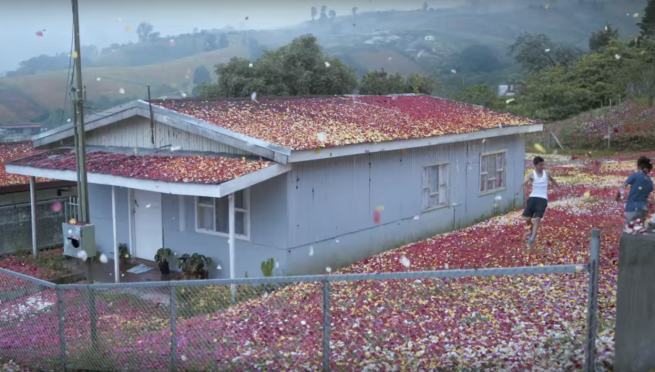 Mere colour, unspoiled by meaning, and unallied with definite form, can speak to the soul in a thousand different ways… For the real artist is he who proceeds, not from feeling to form, but from form to thought and passion. He does not conceive an idea, and then say to himself, ‘I will put my idea into a complex metro of fourteen lines,’ but, realising the beauty of the sonnet-scheme, he conceives certain modes of music and methods of rhyme, and the mere form suggests what is to fill it and make it intellectually and emotionally complete.

– Oscar Wilde, excerpt from “The Critic as Artist”

Images above from (of all places!) a Sony ad, in which eight million flower petals were exploded into the air above a Costa Rican town. The petals, which took weeks to gather, weighed 3.5 tons. While part of me wonders at that many flowers being torn apart (and picked from the ground) a bigger part of me thinks: This is what pure joy looks like.

What a joy that day must have been.