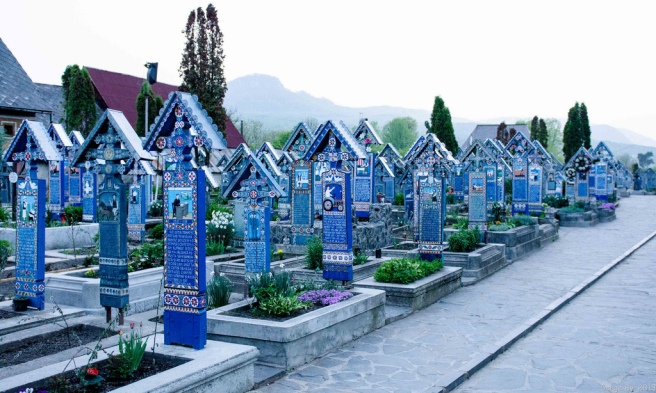 In Romania, there is a place called the “merry cemetery” or in Romanian, Cimitirul Vesel  (cimitirul=cemetery; vesel=joyful, jolly). In the place of tombstones with their solid, solemn permanence, the Merry Cemetery uses wooden crosses, made from oak and painted by local artist Stan Ioan Pătraş, who started the tradition in 1935. (Since his death, his apprentices and followers have kept it alive. Now the graveyard has over 900 crosses, all decorated in the same bold style). Each headstone tells the story of the person buried beneath it, but not in the usual “here lies beloved Mary, wife, mother, and churchgoer” format. No, instead of providing brief, impersonal sketches of the departed’s life, these crosses are decorated with irreverent poems that focus on the follies and foibles of the dead, the colorful details that, in a more staid and stoic society, would cause the corpses beneath to roll over in shock.

This is, I think, the most interesting thing about the Merry Cemetery—aside from the folk art paintings and the striking cerulean hues. This is a place where death is allowed to be funny, even joyful. The dead don’t lose their personalities; instead of being placed beneath bland and anonymous pieces of granite, the dead lie below brightly colored tributes to their idiosyncrasies. A critical mother-in-law is remembered in a rhyming epitaph for her sharp words and wit. A known womanizer is immortalized for his favorite vice. (“Ioan Toaderu loved horses,” reads his headstone, “One more thing he loved very much / to sit at a table in a bar / next to someone else’s wife.” I believe it rhymes in Romanian.) 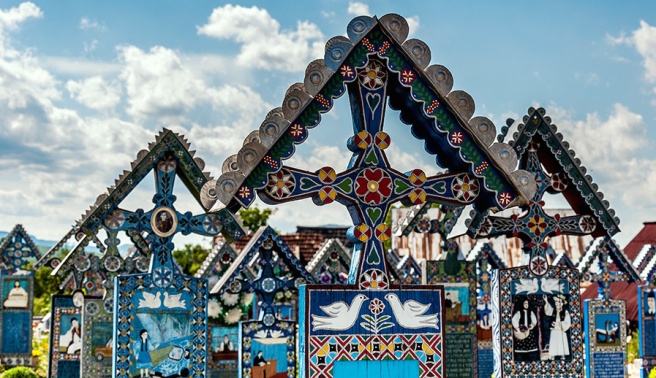 I’m afraid of too many things, which is perhaps why I love this approach to death. It seems natural and human. Consoling, in that strange way (I think dark humor is comforting, even when it’s a bit terrible and offensive—it takes the sting away from real terrors). The moment I saw images from the Merry Cemetery, I remembered a book I once read about Frida Kahlo that describes the artist’s feelings about death. Obviously, the visuals call to mind Mexico’s Day of the Dead, with its sugar skulls and dancing skeletons, but I think the resemblance goes even deeper than that. According to this book, Kahlo saw her death as a figure that was always close, always waiting for her, a thing that loved her, and wanted to see her home. It was her skeletal shadow. If you look at death like this, like Kahlo did and perhaps some Romanian artists do—death isn’t the enemy. Just a friend that you don’t want to meet right now.

4 thoughts on “A very merry approach to death. ”